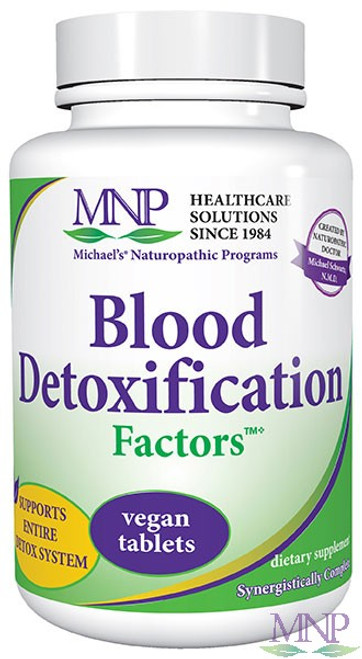 A formula to support the body in removing toxins from the blood stream by attaching to toxins flowing in the circulatory system to allow for proper detoxification by the liver, with assistance by other tissues and fats.

Blood & Detoxification
Blood is the lifestream of the body,affecting every cell and system we possess. The bloodstream is a conglomeration of
many different elements, each working in a specific way to keep us alive.

As a dietary supplement, take three (3) tablets with breakfast or, for optimal results, take one (1) tablet with each meal. Dosage may be increased as directed by a healthcare practitioner.

There are three main types of cells in the bloodstream. Red blood cells are the most numerous, making up about 40% of the total blood volume. White blood cells and platelets make up about 5% by volume. The remaining half of the blood

Nutrients are the substances needed by the body's tissues to sustain their normal function and growth. The principal nutrients are sugars, fats, amino acids, vitamins, and
minerals. All these are dissolved within the plasma and transported to each cell within the body.

The primary proteins in the plasma serve either as part of the clotting mechanism, as part of the immune system,
or as transporters for nutrients or hormones. Hormones are chemicals used to regulate many of the body's functions. They are produced in the endocrine glands and then released into the bloodstream to their various target organs elsewhere in the body.

OptiZinc is a Trademark of InterHealth Nutraceuticals Inc.
Made in a GMP facility that processes egg, fish, milk, shellfish, soy, tree nut and wheat products.

Accidental overdose of iron-containing products is a leading cause of fatal poisoning in children under six. KEEP THIS PRODUCT OUT OF REACH OF CHILDREN. In case of accidental overdose, call a physician or Poison Control Center immediately.